XGBoost is a popular Python library for gradient boosted decision trees. The implementation allows practitioners to distribute training across multiple compute instances (or workers), which is especially useful for large training sets.

One tool used at Zalando for deploying production machine learning models is the managed service from Amazon called SageMaker. XGBoost is already included in SageMaker as a built-in algorithm, meaning that a prebuilt docker container is available. This container also supports distributed training, making it easy to scale training jobs across many instances.

Despite SageMaker handling the infrastructure side of things, I found that distributed training with XGBoost and SageMaker is not as easy as simply increasing the number of instances. I discovered a few small "gotchas!" when attempting a few simple trainings. This post will step through my failed attempts, and end with a genuine distributed training with XGBoost in Amazon SageMaker.

I wanted to get an intuitive idea of how well the training time with XGBoost scaled as the number of instances scaled, as well as the training time when the data size increases. I am not especially interested in producing the "best" model to solve a problem, per-say, but there is a natural trade-off between training time and model accuracy that should considered.

For a data set, I used the Fashion MNIST by Zalando Research. The problem itself is to classify small images (28x28 pixels) of clothing as being from 1 of 10 different classes (t-shirts, trousers, pullovers, etc). The data set has 60,000 images for a training set and 10,000 images for a validation set.

For each of the SageMaker training jobs, I used the ml.m5.xlargeinstance.

I used a naive approach: other than the settings mentioned in the "Experiment Setup" section, I used default values, including a replication factor of 1. What I found was very different from my expectations: 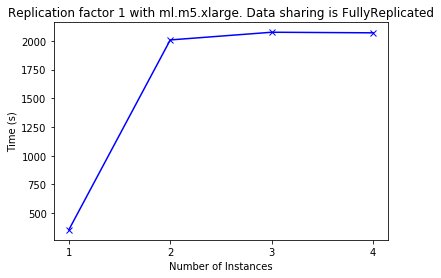 Going from 1 to 2 instances demonstrates an internal switch of non-distributed to distributed training with XGBoost. There is a hyperparameter called tree_method which sets the algorithm used for computing splits at a node in a decision tree of XGBoost. The default for tree_method is "auto". For one instance, their greedy algorithm called "exact" is used. For more than 1 instance, an algorithm called "approx" is used, which approximates the greedy algorithm. The logic behind "auto" is explained in the XGBoost documentation (as well as other algorithm choices) and the implementation of "exact" and "approx" are described in the XGBoost paper from Chen and Guestrin.

The data distribution can be corrected by sharding the training data (dividing it into different files, one for each instance), and defining an s3_input object such as

and then starting a training job by passing the s3_input objects for training (and a similar one for validation):

To correct my previous failed attempt at distributed training, I made two changes to my experiment: 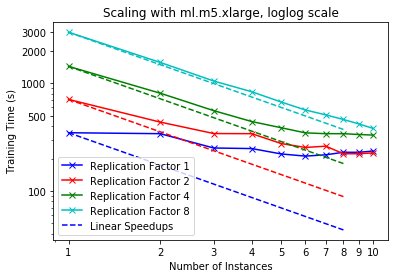 The first plot shows the training times for each of the 4 replication factor. The second plot is the same as the first, but in log scale. The dotted lines indicate my expected training time (i.e. doubling the number of instances should halve the training time).

This actually looks pretty good! The training times match well with what one might expect. The trainings with higher replication factors require more time to run computations as there is more data to process. In fact, it's about a factor 2 increase in the training time when the training data size is doubled. It's also worth pointing out that more training data results in better scalability. In fact, with lower replication factors, the training time plateaus (actually, it even increases a little) with a larger number of instances. This would suggest that the overhead costs are eating the benefits of distributing the workload.

At first glance, everything seems to be ok: more training data implies longer training times, more compute resources implies shorter run times. But a check of the training and validation errors shows that something is not right: 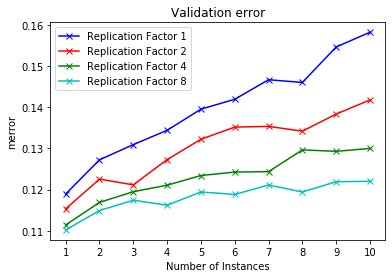 As the number of instances increases, the error for training and validation increases. This is an artifact of the hyperparameter tree_method. For distributed training, XGBoost does NOT implement the "exact" algorithm. However, SageMaker has no problem letting us select this value in the distributed trainings. In this situation, the training data is divided among the instances, and then each instance calculates its own XGBoost model, ignoring all other instances. Once each instance is finished, the model from the first instance is saved, and the others are discarded.

The timing and error graphs reflect this behavior: as the number of instances increases, the training data on any given instance is smaller, resulting in faster trainings but worse error. A cheaper way to replicate this experiment is to throw away a percentage of the training data and then train with only one instance.

After the learning from the previous attempt, I repeated the experiment, but this time using "approx" for tree_method. This does introduce a new hyperparameter, called sketch_eps, for which I use the default value. 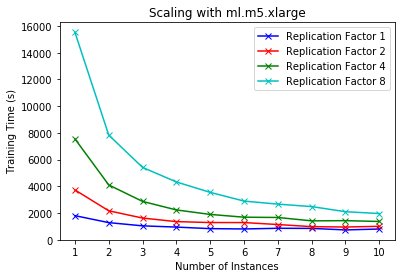 The scaling looks good here and similar to those from experiment 2, albeit with longer training times. A check of the training and validation errors is more satisfying: 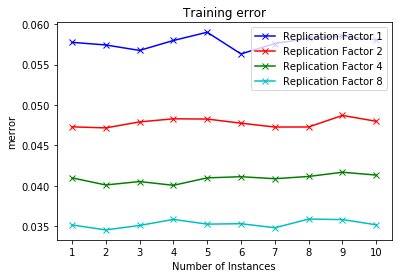 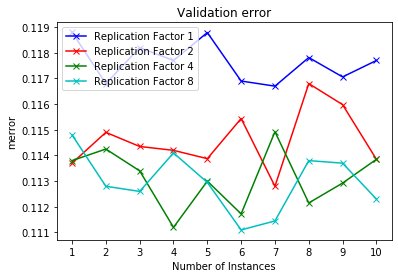 From the training and validation errors, we do see noise appearing. Note that there is randomness to using XGBoost: the piece of the training set given to each instance was selected randomly for each training, and node splitting in a decision tree has randomness (see hyperparameters like subsample or colsample_bylevel).

Amazon SageMaker makes it easy to scale XGBoost algorithms across many instances. But with so many "knobs" to play with, it's easy to create an inefficient machine learning project.