The business landscape in Zalando is growing every day. This continuous growth implies that we need to be able to cope with an ever-changing environment. Everyone with experience in software development knows that dealing with changes is a challenging problem. Especially, when the software is already working in production. Changing the software in production is like changing the tires on a car while it is still moving.

In large organisations such as Zalando, where microservices architecture is the standard, changes are even more frequent. Technologies become obsolete, organization structures change, teams split or merge, monoliths are being rewritten, and yesterday's microservices become today's monoliths. All those examples impose dramatic changes in codebases.

Naturally, testing is the first solution that comes to our minds when trying to minimize the regression of a change. But, in scenarios like decomposing a monolith or replacing a legacy component with a newer one, testing might not be enough. Furthermore, there are always dark corners in our systems that we have never tested or we don't know their behavior (anymore). Sometimes, as you may well know from your own experience, legacy systems don't even have tests one can use as a reference.

In this article, we will explore a design pattern called the Parallel Run1 which is a strategy to make sure those dramatic changes will not break the system. We will walk you through a real-world example and describe how we managed to replace a service by taking advantage of this pattern and show you the challenges and surprises we dealt with. In the end, we summarize the upsides and downsides of this pattern to better help you choose when to implement it and when not.

Decomposing the monolith, a case study

Zalando is aiming to unify the user experience across platforms2. As part of this effort we, the Returns team, were required to extract the returns logic out of a soon-to-be legacy monolithic application. Returns logic, as the name might imply, deals with everything to do with customers returning articles they've bought on the Zalando Fashion Store. This article will explore how our team used the Parallel Run pattern to transparently and safely extract the returns logic from the monolith to the new Returns microservice.

This new service should behave exactly like the respective part in the monolith and the customers should not notice any difference after the migration. In order to achieve this, the following complications needed to be overcome:

In order to solve these problems, wouldn't it be nice if we could verify that each request handled by the new system would be handled exactly in the same way as for the system currently running in production? The parallel run pattern does exactly that.

There are several ways of implementing this pattern. Hereafter we present how we solved it for the above use case.

The following diagram shows the flow for each incoming request: 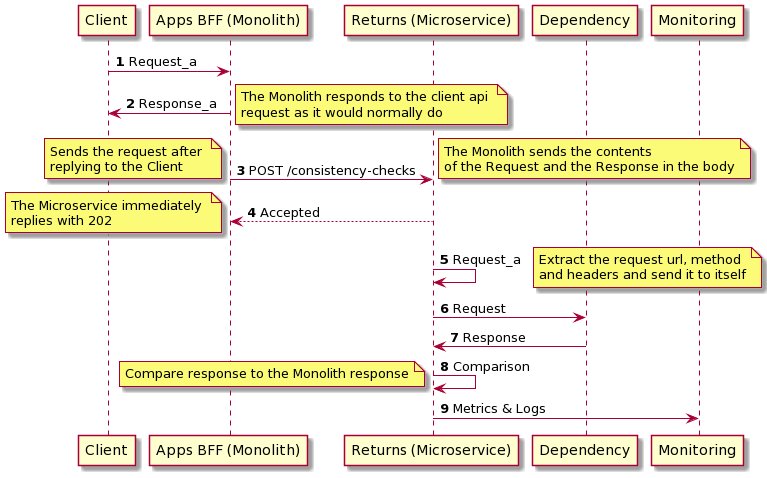 The following is an example of the structure that we used:

Each endpoint of the monolith has its own expected consistency to be reached in order to declare the migration successful. Once that threshold has been achieved, the migration can be considered safe, and we can perform the switch from the monolith to the new Returns microservice for that endpoint.

In order to consider an endpoint ready, it had to reach a satisfying consistency percentage. For each request we produced the result metrics using Prometheus, and we displayed them with Grafana. Each endpoint, defined by an operation_id, had its own metric and its own tolerance. This was done because, as usual, fixing those last few percentages has a cost higher than the value it brings; given that each endpoint is completely separated from one another, each endpoint had its own target percentage to consider it consistent (enough).

Matched: counter for all the requests that matched between the monolith and the Returns microservice.

Unmatched: counter for all the requests that did not match between the two services. Possible examples could be:

Failed: counter for all the requests where the response was terminated by temporary issues, such as for example in case of any 5xx. In these cases, even if they matched it would not be a valuable information given that the request couldn't be properly fulfilled due to a transient server-side issue. On the other hand, if the request did not match for 5xx cases, the unmatched counter should be increased because it means the overall behavior of the Returns microservice doesn't match the one from the monolith, and it requires a deeper investigation.

The switch was done gradually, and it was done per endpoint to allow the system to be tested in a fully functional way. This was achieved by using a proxy to move the forwarding of the requests to the Returns microservice one by one once they were ready. In our case we used Skipper, an open-source Proxy developed by Zalando.

In this way, by minimizing the amount of endpoint rolled out to one per switch, we avoided introducing a massive set of changes in one go, and we were able to collect additional feedback by every single switch while still working on finalizing the other ones.

Advantages of this approach

While this approach makes the migration safer and smoother, it has also some concerns and issues to be kept into account.

Implementing a parallel run is rarely a trivial affair, and is typically reserved for those cases where the functionality being changed is considered to be high risk. (...) the work to implement this needs to be traded off against the benefits you gain.

In the end, this pattern is just a tool that should be used wisely considering constraints, use cases, and team capacity when planning for it. When it is done properly, it saves you a lot of headaches.