In the Performance Marketing department, we run paid advertisement campaigns for Zalando. To do so, we build services that allow us to manage campaigns, optimize and distribute content, and measure the performance of the campaigns at scale.

Talking about measurement, one of the core systems we’ve built and continuously extended over the years is our so-called marketing ROI (return on investment) pipeline. The ROI pipeline is a batch based data- and machine learning pipeline powered by Databricks Spark and orchestrated by Apache Airflow. It consists of various sub-pipelines (components), some of which are built using our python sdk zFlow. Examples for said components are our input data preparation, marketing attribution model or an incremental profit forecast for our campaigns. These components are owned and developed by different cross-functional teams (applied science, engineering, product) within Performance Marketing. You can read more about the way we measure campaign effectiveness from a functional perspective in our previous blog post.

A recurring problem we faced during the development relates to the nature of the marketing ROI which lacks a ground truth1. It means that while we oftentimes have assumptions on what the impact of a change in input data or to our components has on the ROI, we require the new version of the ROI pipeline to be run end-to-end to confirm our assumptions. Since different teams are working on different components of the ROI pipeline in parallel, evaluating the impact of a change on the final ROI in isolation is required to work effectively (i.e. teams not blocking each other). The following section explains the problem in more depth.

As mentioned earlier, we are using Airflow to orchestrate the overall pipeline. The Airflow code is stored in a github repository. We have two servers, production and test. When a pull request is opened, the Airflow pipeline is deployed to the test server. On merge to the main branch, we deploy to the production server. In this setup, we have two so-called pipeline environments, a production (live) and a test environment. The live pipeline uses the live data environment while the test pipeline uses the test data environment. As our data layer, we’re mainly using AWS S3 with data organized as Spark tables. A set of Spark tables represents a data environment. Only one version of an Airflow DAG such as our marketing ROI pipeline can exist in each environment. When multiple features are developed at the same time, they have to share the test environment which oftentimes leads to conflicts since testing in isolation is not possible. Alternatively, the features can be tested sequentially which leads to delays. To solve the problem, we implemented a mechanism to enable a flexible number of Airflow environments. Moreover, we also developed a script to spin up new data environments.

Figure 1 depicts the relationship between a pipeline and data environments.

A pipeline environment is a version of a pipeline (set of Airflow DAGs) deployed to an Airflow server on which it can run end-to-end. Each environment contains all DAGs necessary to produce the required output (e.g. marketing ROI in our case), so multiple environments can co-exist on one server and can be used independently.

Figure 2 shows how this could look like on the test server. We have 2 Airflow DAGs qu.test_dag and qu.test_dag_2 with three different environments: feature1, feature2 and feature3. "qu" is the name of an internal team at Zalando. The DAGs always have the team name as prefix. It means that the same DAGs are adapted and deployed through three separate pull requests. 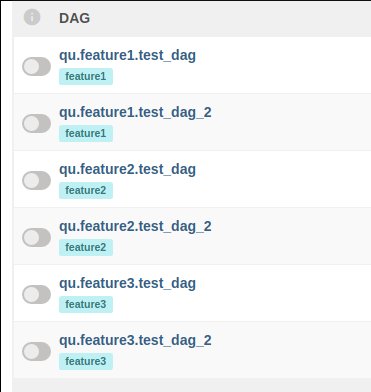 When the corresponding pull request is closed, the environment will be deleted automatically. How did we implement this since the concept of environments does not exist in Airflow? To achieve this, we adjusted the source code of the Airflow library and developed a cron job which deletes the environments later on. The following sections explain necessary modifications made.

The Airflow code is deployed as a single zip archive using the Packaging DAGs feature. This feature prevents dependency conflicts because every deployment only uses the dependencies which are defined in the same zip file. The zip file has the name of the branch from which we are deploying. For example, when we deploy the Airflow code from branch feature1, the zip file is called feature1.zip.

A problem occuring through the use of zip file is that jinja templates for files are not working anymore. Jinja detects the absolute path of the file correctly but the file cannot be read because it’s inside a zip file. For this reason we also deploy the unpackaged zip archive in a different location. Inside the dag.py file (see Figure 3 line 13 - 19) we add the location of the unpackaged files to the template search path. As a result, jinja now searches for templates inside the unpackaged folder.

On one Airflow server, it’s not possible to create multiple DAGs with the same id. Therefore, we have to rename the DAG ids for every deployment. For that reason we adapted the dag.py file (see Figure 3) of the Airflow library which contains the DAG class. Inside the init method we are checking the file path of the python file which is initializing the dag. The path contains the name of the zip file, e.g. feature1.zip. This way we can differentiate the environments. We modify the original DAG id and inject the environment name (see Figure 3, lines 3-11). Furthermore, we add the environment name as a tag to enable filtering on environments.

We have developed a cron job that checks the status of pull requests. Once a pull request is closed, the corresponding environment is deleted on the Airflow server. The job deletes the zip file and the folder which contains the unpackaged files. Then, it queries the Airflow metastore for all associated DAGs and deletes them via Airflow cli. 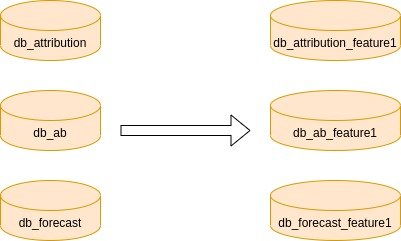 Figure 5: Creating a view instead of copying data

A view is only created if the table is not used as output by one of the respective tasks. In some cases you need initial data for tables which are used as output. Therefore, the table environment script creates a configuration stub for these tables like that:

If you define the partition ranges and execute the data environment script, it creates the table and copies the data for you.

In this blog post we presented how we enabled versioning of our performance marketing pipeline which is based on Apache Airflow. The Versioning is necessary to enable more convenient simulation and testing. We modified the Airflow DAGs class and used the Packaging DAGs feature of Apache Airflow to make it possible to have multiple versions of the same DAGs on a single server. This allows us to deploy a git branch consisting of Airflow DAGs directly to a single Airflow server where they can run isolated from other versions. The deployment takes less than 1 minute compared to up to 30 minutes when you create a new Airflow server for the deployment. To enable isolation on data level we implemented a script which spins up a new Data Environment consisting of Spark/Hive tables on S3. As a result, every Pipeline version can use a dedicated Data Environment.

Are you interested to join us to work on such problems and many more business related challenges? Apply as a Senior Data/ML Engineer at Zalando’s performance marketing department.